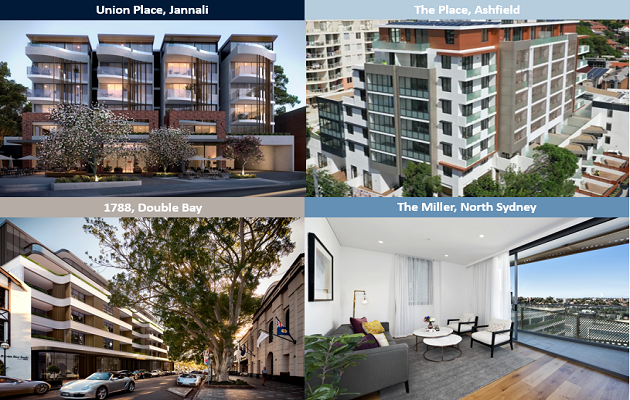 A tale of two cities: How big is the off-the-plan settlement risk in Sydney?

In the last edition of 3 Observations, we pondered whether the Sydney new apartment market would parallel Brisbane’s and promised to bring you insights from our own exposure to this market.

Looking at our five largest residential apartment projects in Sydney, our initial observation is that risk is location specific and not correlative across the city. It’s also nowhere near as material as what the media is suggesting. Rather it’s marginally higher than normal market conditions.

In the Sutherland Shire suburb of Jannali we offered 89 apartments for sale as part of our Union Place project. Some 30 per cent of the apartments were sold to investors, all of which have settled. The vast majority of our buyers were owner-occupiers, many of whom are local to the area and it was a largely Anglo-Saxon buyers-base responsible for around 70 per cent of the purchases. To date, 80 of the apartments have settled with five not completed due to finance issues. These failed settlements were all first home buyers.

Interestingly valuations came largely inline with the acquisition price, even though majority were recorded in 2016 and 2017.

It’s a tale of two cities when you compare another of our developments. In the highly multicultural inner west suburb of Ashfield, White & Partners acted as the first mortgage funder for a developer who offered 91 apartments in a development called The Place. The fall-over rate on settlements has been much higher than Jannali, with some 30 per cent not finalising their purchase largely due to restrictions on foreign buyers in relation to money from China. Valuations were also off by 10-15% on acquisition prices achieved between 2016-2017.

Interestingly, buyers who purchased in 2018 all settled with no valuation or finance issues. Is this a sign that developers adjusted to market times by reducing their list prices and hence these purchasers not having an issue?

Across our other projects in Bondi, Epping and North Sydney, it represents the same story:

But this all said, overall it’s fair to say that based on our experience, there are enough settlements to keep the banks at bay and allow developers to hold their stock. An interesting observation moving forward is how long can developers hold, especially as the 50,000 apartments under construction in Sydney are due for completion in 2019.

In one line residual stock loans and purchasers are now more common than ever. Watch this space.