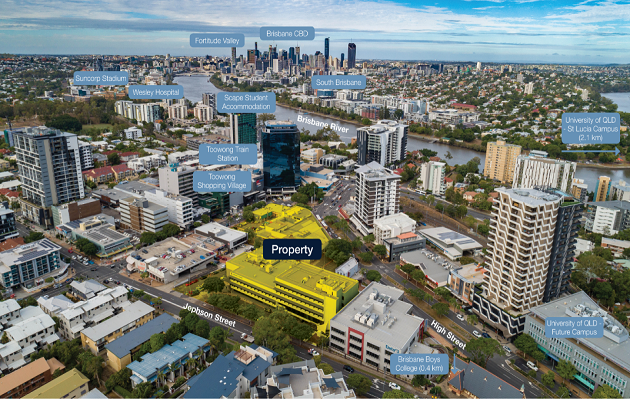 If you wound the clock back 18 months, even as little as a year ago, there was much investor scepticism on the merits of Brisbane. Is that still the case today?

As we purchased a major asset in suburban Brisbane this year, we wondered if our investor clients would join us on the journey.

Our observation of investor interest in the Sunshine State capital today is quite a turnaround on the sentiment last year. Looking at an asset we recently purchased from Stockland, located in Brisbane for $40million, with plans to undertake a large mixed-use development, the investor appetite well exceeded expectations.

The property consists of a dated retail building and a 6,400sqm b-grade office tower leased to a range of service related tenants situated across 1.3 hectares of land. But itis the property’s strategic location in a growing inner western suburb that will allow us to undertake a mixed use development, representing strong value from both an income and development upside perspective. Early stages of planning show that the development has the potential to be a $300million project. The location is comparable to some of the key suburbs in Australia like Chatswood in Sydney and Toorak in Melbourne.

Why the shift in investor sentiment on Brisbane?
It’s a confluence of factors. Certainly Sydney’s returns have been lacklustre of late so investors are looking elsewhere for opportunity. More broadly, the return of a Federal LNP government has given investors certainty. But for Brisbane specifically, some macro fundamentals are helping revive confidence: interstate population shifts have buoyed optimism, increased infrastructure spending is a positive sign (well overdue, some might say), mining has been reinvigorated, international students are flocking there and the reality is that Brisbane much-discussed apartment downturn has turned out to be far less dramatic than the jawboning that preceded it. That predicted death of Brisbane units was more like a long bout of the flu.

At White & Partners offices, we often discuss how investors would have responded to that Stockland purchase 12 months ago. They would have balked, we think.

We’ll keep you updated on progress in this newsletter in coming months.